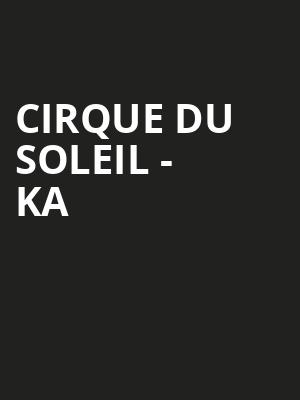 Seen by more than one million spectators since its opening in February 2005, this show differs in style from previous Cirque productions with a linear form of storytelling, but each broken up into awesome vignettes starring a multitude of characters that wouldn't be out of place in a Shakespearean tragedy. Think of a mix between The Tempest with hints of Mulan and Romeo & Juliet, and you may get a hint of what is to come.

KA is a story about conflict and love of imperial twins who are separated at the cusp of their prime and must each undergo a rite of passage of self-discovery inorder to get back home. Along the way, they both encounter Ka, a magical fire spirit that can either destroy them, or unlock a secret power. With help of mysterious friends in unlikely places, the twins undergo a transformation into young adulthood on their journeys and even manage to fall in love; by the time they are reunited, they are more mature and well-equipped to face the dangers that face them in the future. Perhaps even one of their enemies may even seek forgiveness and strive to use their powers for good....

KA by Cirque du Soleil may be inappropriate for children aged 5 and under. Children under 3 years of age will not be admitted into The MGM Grand KA Theater.

90 minutes with no intermission

Due to the nature of the acts in the show, changes in the cast may occur. In addition, the content and duration of the show may differ from time to time. Although we try to keep this information as up to date as possible, neither Cirque or Las Vegas Theater can guarantee its accuracy.

Sound good to you? Share this page on social media and let your friends know about Cirque du Soleil - KA at KA Theatre.