Sorry! You missed Lady Antebellum - Our Kind Of Vegas at Pearl Concert Theater 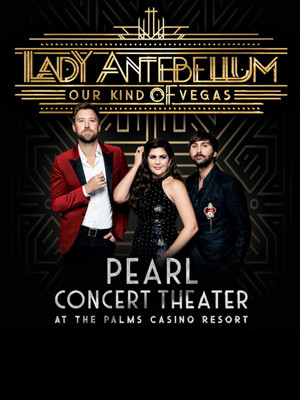 Lady Antebellum - Our Kind Of Vegas

The Nashville trio add a soulful, sultry twist to their jaunty pop as they put on a polished show for a rapturous crowd

Why See Lady Antebellum - Our Kind Of Vegas?

Between February 8th and August 31st 2019, country pop pioneers Lady Antebellum are bringing their no-nonsense, Nashville-tinged stomping grooves and airtight triadic harmonies to the City of Sin during their first ever Las Vegas Residency at the Palms Casino Resort's Pearl Concert Theater. The first ever country act to grace the Palms' holy stage, the outfit are sure to pull out all of the stops with polished production values and multi-dimensional stage designs that all revolve around their chart-topping tunes.

Formed in 2006 by Charles Kelley, Hilary Scott and Dave Haywood in August, Georgia, Lady Antebellum immediately drew attention with their heady blend of R&B soul and contemporary country, quickly graduating from the dive bars of Nashville to the Grand Ole Opry in the space of a few short years. Between 2008 and 2011, their first three albums all hit platinum and nine Grammy Award sealed their status as heavyweight contenders in the industry. The returned in 2017 after a creative three year break with latest effort Heartbreak, heralding a brand new era of ruling the charts and airwaves.

Therese Karsten: “Problem with View--Not a concert for listeners”

I love Lady A's music. My husband and I were visiting on business and... more

Sound good to you? Share this page on social media and let your friends know about Lady Antebellum - Our Kind Of Vegas at Pearl Concert Theater.