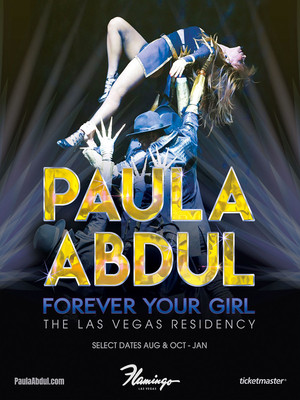 The remarkable multimedia experience highlights Abdul's accomplishments through song, dance and stories of her three-decade career atop the charts and entertaining millions of fans worldwide.

Singer, dancer, choreographer and original American Idol judge, Paula Abdul will be gracing the city of Las Vegas with a residency this August. Paula made her start in entertainment as a cheerleader for the Los Angeles Lakers before becoming a choreographer and being enlisted by The Jacksons. Her music career kicked off with her 1988 debut 'Forever Your Girl' which was one of the most successful debuts of the time.

Paula is an original music icon and is known for her hits 'Straight Up,' 'Forever Your Girl,' 'Cold Hearted' and 'Opposites Attract' as well as being a judge on American Idol alongside Simon Cowell and Randy Jackson.

In 2018, the star headed on a nationwide sold-out tour and is ready to bring that same dazzling energy to the Las Vegas stage.

Best show i’ve ever seen in Vegas. She connected with the crowd with... more

Mark: “Bigger fan now than before”

great show. If you were alive in the 90’s you owe it to yourself to... more

Sound good to you? Share this page on social media and let your friends know about Paula Abdul at Flamingo Showroom.