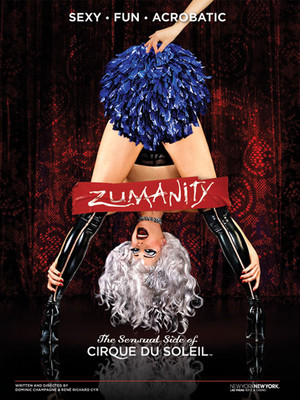 ZUMANITY has some of the most beautiful things you may ever see on a stage....

GETTING VEGAS HOT UNDER THE COLLAR SINCE 2003!

Leave all your inhibitions at the door and let loose as this adult-themed Cirque show takes you on a sexy thrill ride full of sensational acrobatics and seriously naughty fun. Part burlesque and part cabaret, Zumanity is one sexy night out that you'll never forget - now that's what we call a Sin City show, baby!

Since its unveiling on September 20, 2003 , Zumanity long since passed the 1,000th show milestone and has seduced over one million patrons from around the world, with its daring eroticism and playful innuendo. Zumanity has also garnered the accolades of national and international audiences and media alike.

The show consists of various raunchy vignettes including:

You will have to leave the under 18s at home for this one, it is seriously R-rated!

Guy Lalibert admits that the biggest reason to produce this show was the chance to create something with riskier subject matter. He was interested in the idea of creating a show that explored human sexuality, something that was at complete odds with the other, more family-oriented Cirque du Soleil shows.

Zumanity's haute couture costumes were designed by famous French designer Thierry Mugler. Zumanity is the first Cirque show to dress its performers in high fashion, each one with a different look.

Guests must be 18 years and over. Mature content and nudity, although please note that NO live sex acts take place in this show

Zumanity will not be performing on the following dates in 2014:

Sound good to you? Share this page on social media and let your friends know about Cirque Du Soleil - Zumanity at Zumanity Theater.