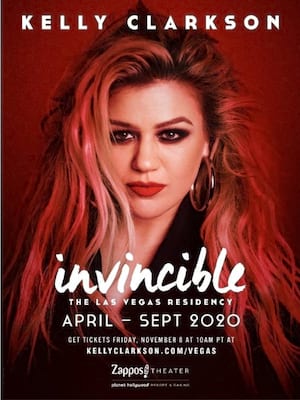 Global superstar and Grammy award winning Kelly Clarkson is bringing her sensational talent and headlining a brand new Las Vegas Residency, titled Kelly Clarkson: Invincible. This one of kind experience with Clarkson, will have you immersed and rocking through Clarkson's incredible two-decade catalog of smash-hits.

Since bursting onto the music scene 10 years ago, Kelly Clarkson has released 5 studio albums (Thankful, Breakaway, My December, All I Ever Wanted, Stronger), sold over 20 million albums worldwide, 10 million albums in the US and has had 9 singles in the top 10 on the Billboard Hot 100 Singles Chart. She is the recipient of 2 Grammy Awards, 2 American Music Awards, 2 MTV Awards, 1 Country Music Award and 11 Billboard Awards.

Clarkson recently finished her contract with her previous record deal. The company strictly limited her releasing only pop music, since leaving Clarkson has risen like a phoenix in genres' such as soul and R&B.

Kelly Clarkson concert was so amazing and fun . She is a true down to earth... more

Wow, she was great. Her voice is just as good in person as her recordings.... more

Sound good to you? Share this page on social media and let your friends know about Kelly Clarkson at Zappos Theater at Planet Hollywood.