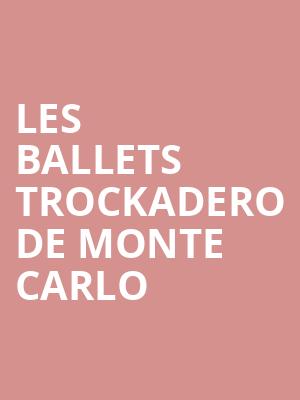 The years (and there are four decades of them) have only seen standards rise with the Trocks; the pointe work is more than commendable.

BELIEVE IT OR NOT, THESE GUYS ARE AN AMERICAN COMPANY!

From the first sold out performance in 1974 in a second story loft theater in Manhattans meat-packing district to this day, Les Ballets Trockadero de Monte Carlo have travelled all over the world. As the darlings of the ballet world, the "Trocks" combine a loving knowledge of classical ballet with a wicked sense of humor, displaying a startling mastery of technique that will appeal to ballet aficionados and complete novices alike.

The repertoire of the Trocks ranges widely from Swan Lake, Don Quixote, even the Nutcracker, spoofing George Balanchine productions, The HumpBack Horse, Giselle and Les Sylphides. You name it, they have performed it all over the world (even in front of Prince Charles in 2008), and to a fantastically high standard of ballet, as well as being fabulously tongue-in-cheek about it all. What makes this different from other troupes is that the dancers portray both male and female roles in a humorous style that combines ballet parody, posing and physical comedy with "straighter" pieces that aim to showcase the performers' innate technical skills, which include dancing en pointe.Once you get over the shock of seeing athletically built men in tutus, you will be astounded by the level of skill on display. From hardcore ballet fans to newcomers, the Trocks are ones to watch.

Performance times depend on the program

Absolutely wonderful. Talent beyond belief. This will be my 4th time... more

Sound good to you? Share this page on social media and let your friends know about Les Ballets Trockadero De Monte Carlo at Smith Center.