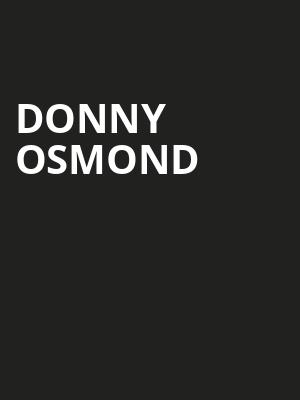 Catch Donny live and solo at his sold-out stint at the one and only Harrah's Las Vegas! The Harry Styles of his day, Donny sung himself into the hearts of teenage girls across the globe as a member of The Osmonds. The family band has a huge string of hits throughout the early 1970s with tracks like Crazy Horses and One Bad Apple, but it was clear which member was destined for solo superstardom.

Donny Osmond set out on his own, and clocked up huge hits like Puppy Love and Soldier of Love and has since carved out impressive careers outside of the music world, including as a TV host and Broadway star. His career came full circle last year with the release of his latest album The Soundtrack of My Life, a collection of covers of his favorite songs growing up, such as Michael Jackson's Ben.

Sound good to you? Share this page on social media and let your friends know about Donny Osmond at Harrahs Showroom.