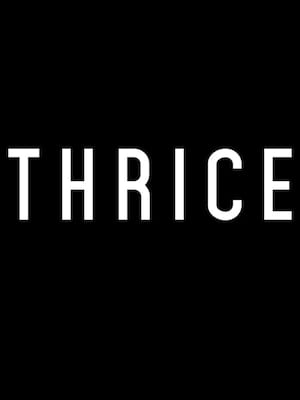 ...a band whose two-decade growth from able but impetuous riff merchants to purveyors of truly ambitious art has been nothing short of inspiring.

Following several years of radio silence after the announcement of an indefinite hiatus back in 2012, Thrice are rising from the ashes ready to unleash a new era of post-hardcore music. Since their formation in 1998, the California rockers have broken ground and rewritten the rule book for the genre they helped define by skilfully blending searing punk, pop, progressive and screamo, resulting in nine studio albums and constant tours around the world.

The cult favorites since dropped new hit single The Grey and are making preparations for another mammoth tour, sparking rumours of a brand new album on the horizon. New material or no, Thrice make for an electrifying and intense live band, known for conjuring a hair-raising wall of sound that often culminates in mosh pit nirvana and crowdsurfing from frontman Dustin Kensrue.

Sound good to you? Share this page on social media and let your friends know about Thrice at Brooklyn Bowl.