Sorry! You missed Greta Van Fleet at The Joint 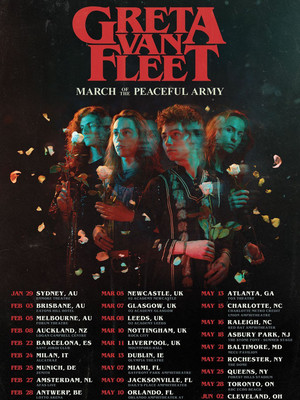 The future of rock and roll

March Of The Peaceful Army Tour.

Greta Van Fleet exploded out of their hometown of Frankenmuth, Michigan in a whirlwind of fire and fury, determined to keep the spirit of classic rock and roll alive. Unapologetically throwing back to rock's golden age, frontman Josh Kiszka's husky growl strongly resembles the wanton howling of Robert Plant, but these young blood rockers are no wannabes. Catch them as they head out on their March Of The Peaceful Army Tour.

Combining gritty blues guitar licks, driving drum beats, fuzzy bass lines and occasionally the soulfulness of a gospel-tinged Hammond organ, these brothers in rock have created a sound, following and live show that belies their young years. Their skillful songwriting and on stage audacity make for an electric live show, one that transports a whole new generation to the halls of rock Valhalla.

Saw them on second night. From the moment the band took the stage the crowd... more

Jeff The Hawk Hawkins If I Got Josh Figet Cell Pho: “Hot band”

Sound good to you? Share this page on social media and let your friends know about Greta Van Fleet at The Joint.