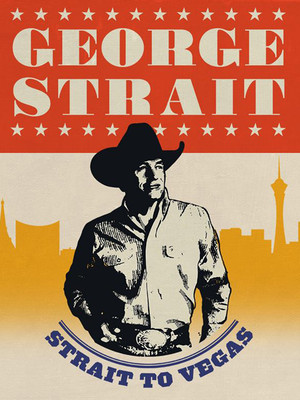 The boots aren't being strung up to rust just yet...

The King of Country set to rule over Vegas!

Country mega-star George Strait returns to the T-Mobile Arena with his Strait to Vegas series. Stuffed with Strait's greatest hits, including classic tracks like 'Unwound', 'Troubador' and 'All My Ex's Live In Texas', don't miss your chance to see this king of Country. Now he has "retired" from touring, this is the only place you'll see Strait live!!

Strait positively exudes the kind of charisma associated with the consummate performers of old. Shying away from gimmicks and trends, Strait rose to prominence in the 1980s thanks to his knack for fusing honky-tonk and western swing with his undeniable charm, revitalizing the 'straight-ahead country' genre in the process.

Imbuing every performance with a warmth and veteran sense of calm and cool, Strait is the undisputed "King of Country Music' with a three-decade career filled 33 platinum-certified records and so many no. 1 hit singles (a whopping 60) he's earned more than an artist in any other genre behind Elvis and The Beatles. There are no bells and whistles when Strait takes to the stage, just good old fashioned country music and a lasting legacy that would make the auto-tune reliant performers of today quake in their cowboy boots.

Sound good to you? Share this page on social media and let your friends know about George Strait at T-Mobile Arena.