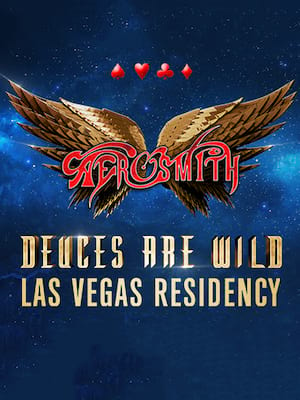 In celebration of their 50th anniversary, Aerosmith often referred to as 'Americas Greatest Rock Band' and 'the Bad Boys of Boston', are rocking Las Vegas' Park Theater with their 'Deuces are Wild' show, named after their 1994 single. Unlike anything fans have seen before, expect an awesome and historic show! And what a history they've had, you'll be taken through all 50 years of the band's career, and as soon as you walk into the venue you're going to feel it!

A Brief History of Aerosmith

Formed in 1969, it only took the band a year until they headed out on their first gig. It wasn't until three years later when Aerosmith released their debut album. In 2001, the rock band was inducted into the Rock and Roll Hall of Fame. The band has also been slated as the best selling American rock band of all time!

My wife and I attended the show this week and it was REALLY GREAT! We... more

They still have it. Steven Tyler's voice shows no holding back. I want... more

Sound good to you? Share this page on social media and let your friends know about Aerosmith at Park Theater at Park MGM.