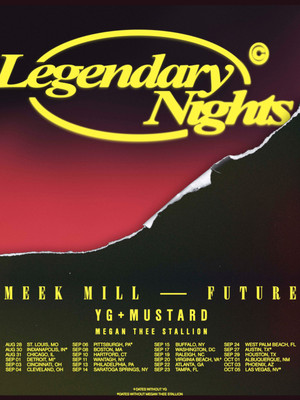 It was an apt summary of not just the show but of Meek Mill's journey to date. He created joy from sorrow, hope from adversity. He gave the crowd a message without sacrificing a good time.

Why See Meek Mill and Future?

Rap stars Meek Mill and Future have announced a joint US tour kicking off on August 28th at the Hollywood Casino Amphitheatre in St. Louis, wrapping up in Las Vegas on October 5th. Dubbed the Legendary Nights tour, most nights will also feature opening sets from YG, Mustard and Megan Thee Stallion in what is set to be an epic bill.

Meek Mill's most recent album Championship was released in November 2018, with Future's seventh LP Future Hndrxx Presents: The Wzrd dropping a couple of months later in January 2019. Both debuted at number 1 on the Billboard 200, further cementing both of their positions as two of the biggest forces in modern rap music.

Seen Meek Mill and Future? Loved it? Hated it?

Sound good to you? Share this page on social media and let your friends know about Meek Mill and Future at Mandalay Bay Events Center.