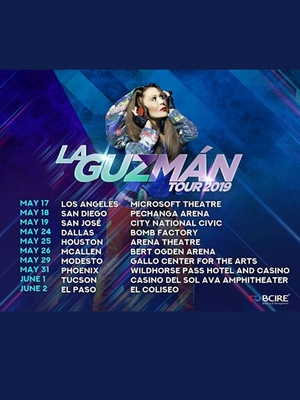 Don't miss this chance to see a living legend rock out and sing her hits!

No stranger to controversy, Mexican pop icon Alejandra Guzman has revelled in her reputation for scandalous live shows, explicit lyrical honesty and sensual, gravel-toned contralto vocals, earning her the titles 'Queen of Mexican Rock' and 'Bad Girl of Latin Pop'.

Daughter of well known Mexican entertainment legends Silvia Pinal and Enrique Guzman, Alejandra has show business running in her veins. From her first TV appearance at the tender age of two to the phenomenal national and international commercial success of her music (she's sold over 30 million records and made her mark on every major genre including pop balladry, dance anthems and rock 'n' roll), she has been an enduring creative force whose reach extends to the stage and screen.

Don't miss the feisty tattooed rock goddess on the La Guzman Tour when it hits US shores this Summer!

Sound good to you? Share this page on social media and let your friends know about Alejandra Guzman at Mandalay Bay Beach.