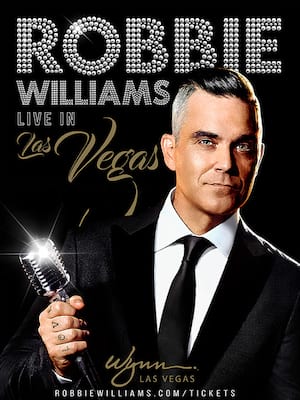 There's still no other British pop star quite as entertaining and unpredictable.

Brit-pop superstar Robbie Williams will electrify the City of Sin with the sounds of his platinum-certified hits when he takes to the Wynn Las Vegas stage during his first ever residency, spanning eight nights in March 2020! Suiting and coiffing up for the occasion, Williams is sure to pull out his greatest hits tunes alongside unique takes on songbook standards.

After saying goodbye to the restrictive boy band stylings of Take That, Williams found solo fame thanks to a stream of successes on both sides of the pond, beginning with his breakthrough debut 1997 album Life Thru A Lens and the subsequent success of the single and iconic video for Rock DJ. His enviable catalogue of iconic songs include Angels, Let Me Entertain You and Millennium amongst other memorable musical moments, so dust off your glad rags and join the rule-breaking frontman as he charts his stellar career hit by pop culture-defining hit.

Sharon: “Let him entertain you”

Came from Australia to see him. Worth every cent. He started with Let Me... more

Sound good to you? Share this page on social media and let your friends know about Robbie Williams at Encore Theatre.