Sorry! You missed Mariah Carey at The Colosseum at Caesars 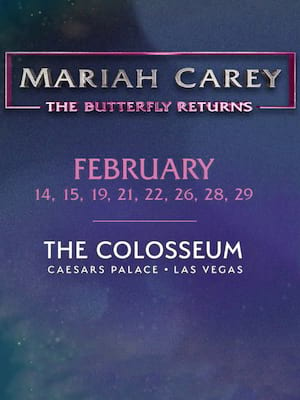 This isn't a Daydream - this iconic diva has conquered Vegas!

Watch out Vegas! The power voiced chanteuse and best-selling female artist of all time is back in Las Vegas with her 'The Butterfly Returns' show this February! A true icon of the music industry, don't miss your chance to see the one and only Mariah Carey live in the sumptuous setting of Caeser's Palace!

anything but a 'daydream'

Since her career took off in the Nineties, Carey has garnered five Grammy Awards, 19 World Music Awards, 11 American Music Awards and 31 Billboard Music Awards; in addition to her hits, she has shown her mettle as a talented songwriter (she did after all write all but one of her 18 number one hits). In recent years she has proved herself in a mainly male-dominated entertainment industry as a record producer. Expect her to belt out 'One Sweet Day', 'Without You', 'Honey' and many many more!

Sound good to you? Share this page on social media and let your friends know about Mariah Carey at The Colosseum at Caesars.