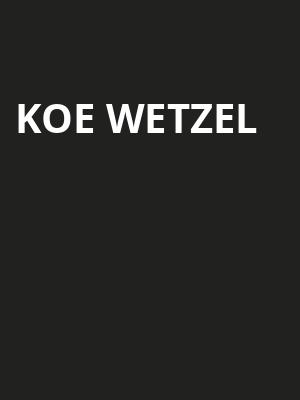 Photo by Samuel Regan-Asante on Unsplash

Trading a stetson for a trucker cap, Texas wild child Koe Wetzel doescountry music his way. A resident of the Lone Star State, he fuses the raw, hillybilly East Texas country music of his upbringing with a punk rock spirit and bro-country hooks, all wrapped up in a fun-loving persona that makes for a party atmosphere at his live shows. Following a massive year, Wetzel is now heading out on the Road To Hell Paso tour!

Music flows through the Something To Talk About hitmaker's veins - picking up songwriting from his musician mother, with whom he toured in his adolescence, he also started playing guitar from age 12. Whilst music took a back seat to sports when he got a little older, he eventually left school to focus on honing his sonic craft. Touring extensively with his band Koe Wetzel & the Konvicts, he paved the way for solo success with rootsy rock 'n' roll tinged anthems and authentic Americana.

Sound good to you? Share this page on social media and let your friends know about Koe Wetzel at The Theater - Virgin Hotels.